THE SEA IS PART OF OUR SPA

For centuries, people have used the sea for its health-promoting properties. From that knowledge and traditions, Thalasso therapy has been developed. The therapy uses marine elements in treatments and experiences, such as seawater, mud and seaweed together with the beneficial properties of sunlight and coastal air.

Being a Thalassotherapy spa means that: 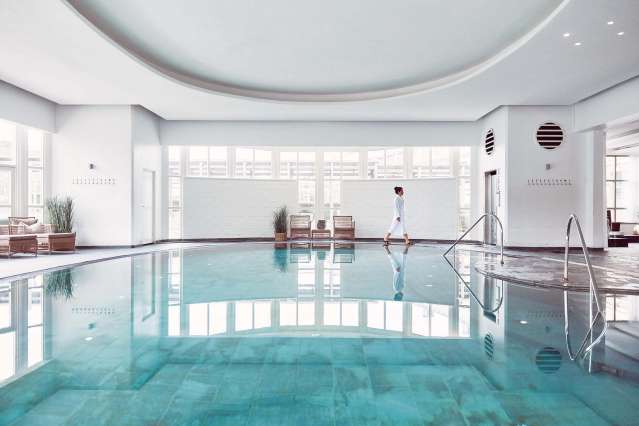 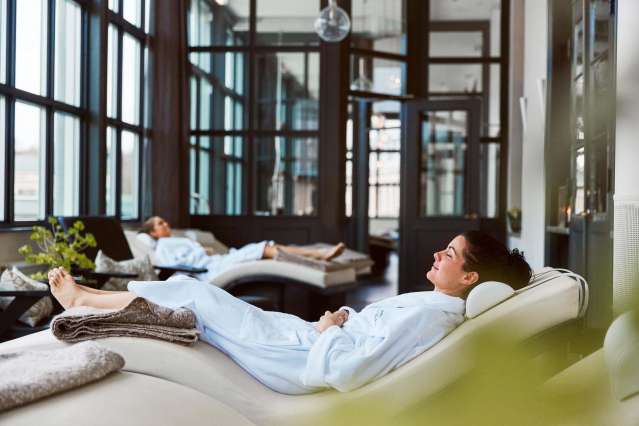 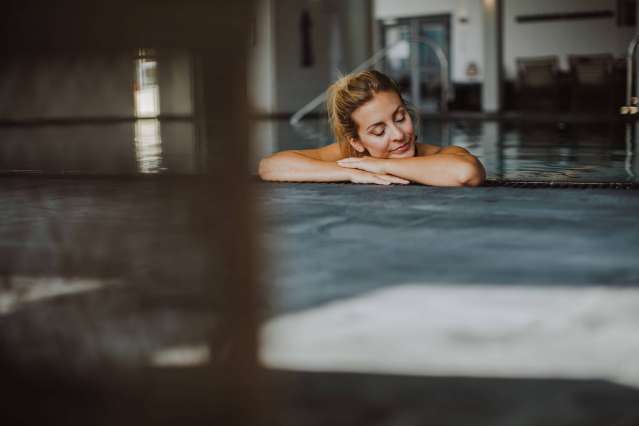 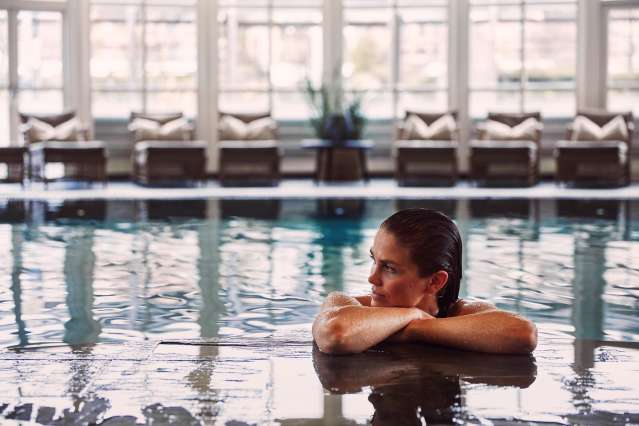 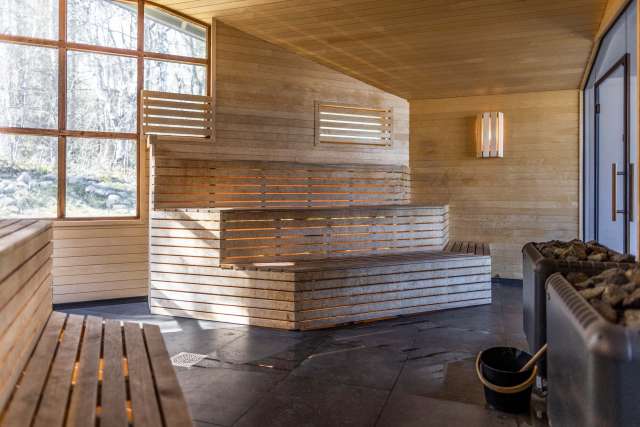 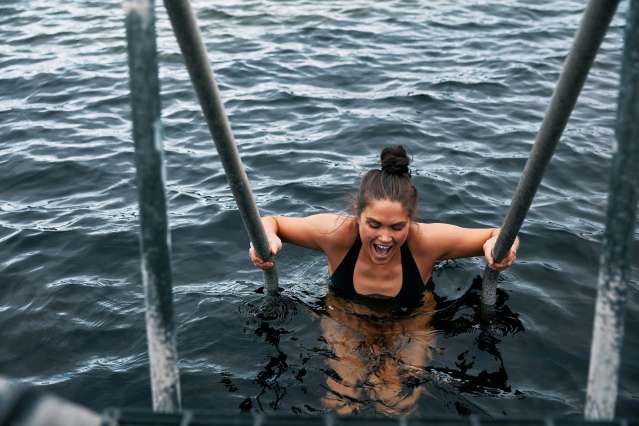 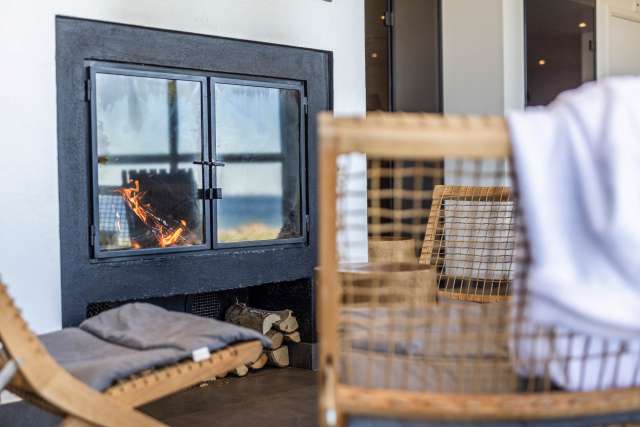 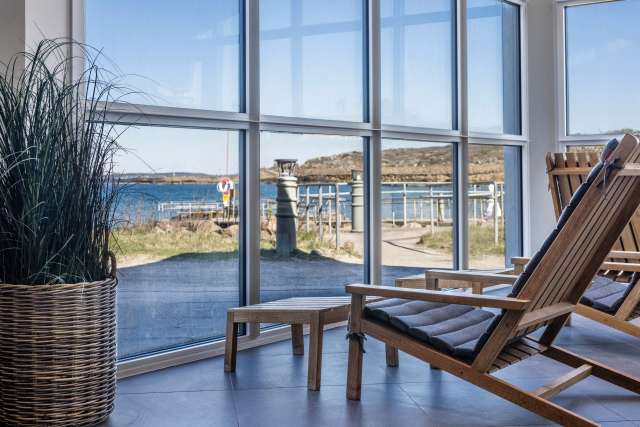 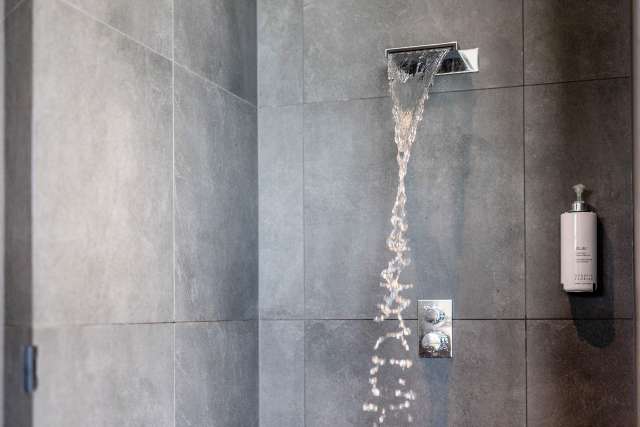 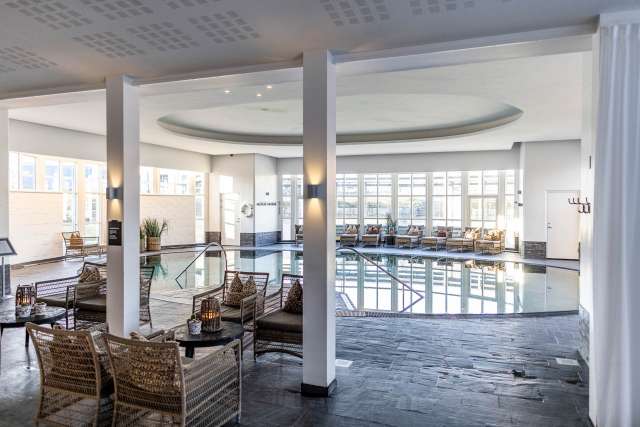 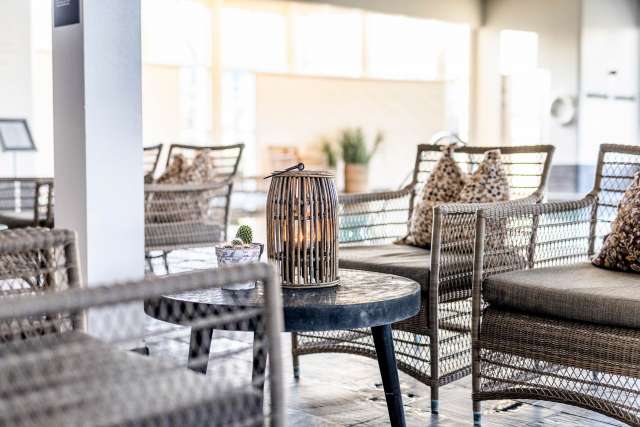 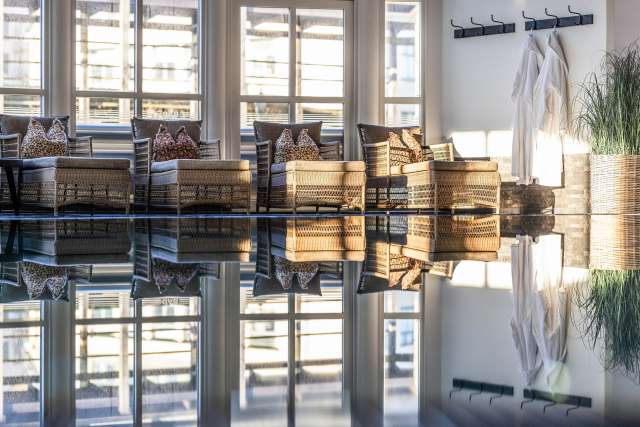 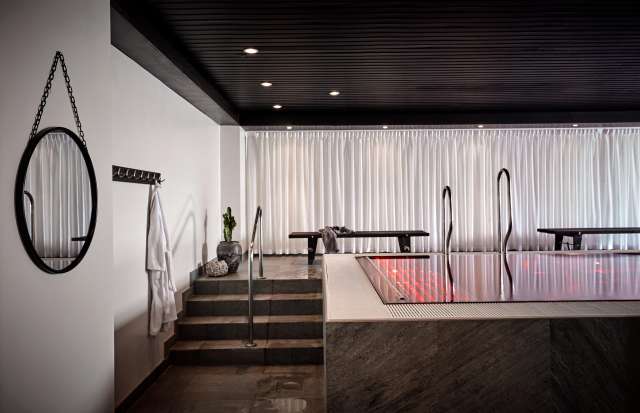 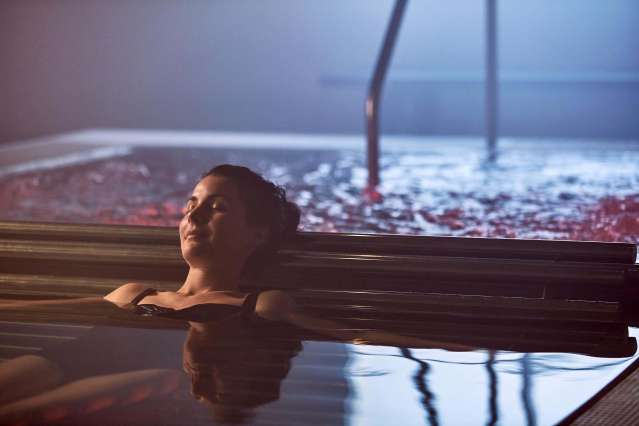 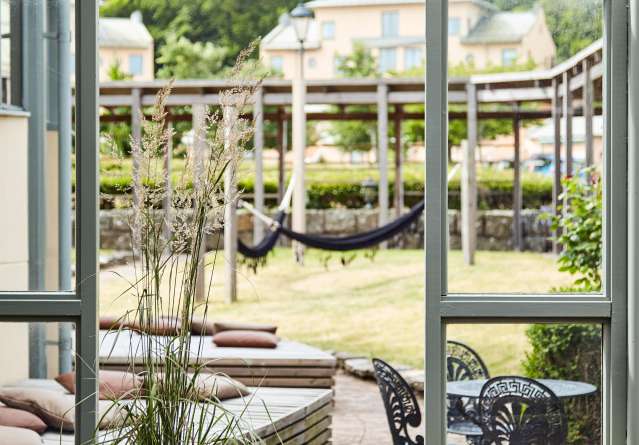 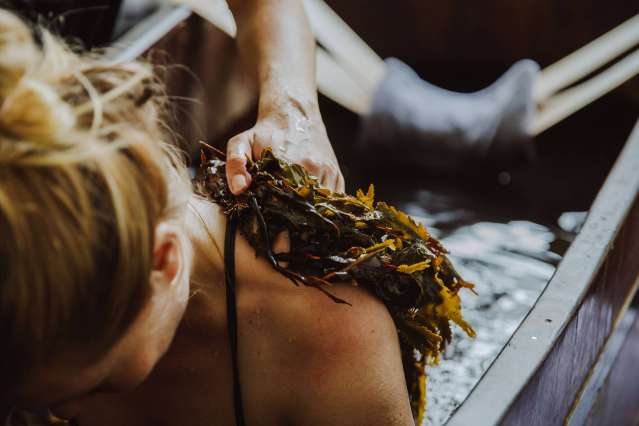 We borrow the water for our heated seawater pool directly from the Kattegatt and heat it to 32 C for you to enjoy. The seawater with its high salt content has antiseptic properties and contains important minerals that are healthy for our skin and body. Alternating temperatures in cold and warm pools and several experience showers contribute to the thalassotherapy experience. The sea is always close by.

Enjoy the warmth in the steam sauna, the comfortable 50 C temperature in the sauna used between treatments, or the hot sauna, where the temperature is 80 C. Join a sauna ritual in our cold bath house, where our spa therapists supervise rituals that feature seaweed, salt or ice. From the jetty outside the open air bath house, you can end your sauna session with a dip in the sea. The contrast in temperature between hot and cold produces an adrenaline rush and a feeling of being invincible.

Combine your spa visit with a beneficial spa treatment. Time for You is a spa treatment that is completely customised to your needs, where you choose the focus area: body, face or feet. We use several different treatments for the Time for You treatment: deep massage using oil, body scrub with sea salt or a mud mask to name but a few. If you want to bring a friend or partner, you can enjoy a duo treatment.

Admission to our thalassotherapy spa includes free fitness classes and access to our indoor and outdoor gyms. Take part in a group fitness class with movement and rhythms, a sweaty spinning session for aerobic exercise or focus on breathing in a yoga session. In our gyms you can plan your workout to suit you. The hotel is surrounded by beautiful nature, perfect for pleasant walks or runs.

When you want to retreat for a while, close your eyes and take a few deep breaths, we have the space for rest and recovery. Immerse yourself in one of the beds in the relaxation area and let the light from the large veranda windows restore your energy. In the spa lounge, you can sit down for a quiet moment. During the summer months, we open up the doors to our lovely spa garden with hammocks and sun decks. There you can find your place in the sun. 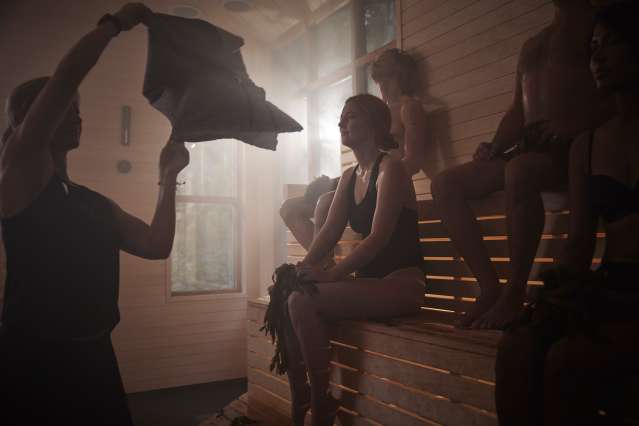 Enjoy a genuine thalassotherapy experience with sea bathing, salt, seaweed or ice in our sauna right by the sea in our cold bath house.

Our sauna rituals are led by a sauna host who will guide you through a wonderful experience in the sauna. We start by pouring water mixed with aromatic essences on the sauna stove. Using a towel to disperse the steam, we achieve a comfortable temperature in the sauna. Depending on the theme, you will then scrub your body or rub it using menthol, salt or ice. Then it's time for a dip in the sea. We finish by warming up in the sauna again. 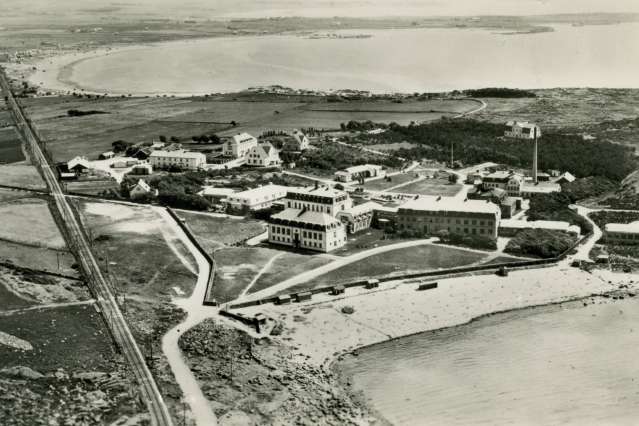 The fact that we use the sea for invigorating, health-promoting and relaxing experiences is nothing new. We are developing and refining the spa traditions that have existed locally in Varberg for more than 200 years. We are proud to be part of Varberg's unique and vibrant spa and sea bathing environment.

Varberg’s reputation as a health destination dates back to when the city's natural spring, the Svartekällan spring in Apelviken began to be used for medical purposes in the early 1800s. The spring developed a reputation for being able to cure diseases and protect against evil. It became fashionable to drink spring water, and this ritual often turned into al fresco suppers enjoyed on the grass. The Svartekällan spring was in use between 1811 and 1888 and attracted many health visitors to the city.

The birth of bath houses and open air baths

In the mid-19th century, both the arrival of the railways and a steamship service led to a strong increase in the popularity of Varberg as a travel destination. The city therefore decided to build both a new, modern bath house and an open air bath house, both of which were completed in 1886. Guests were offered mud and seaweed baths, massage room, saunas, several showers and hot and cold sea baths. The bath houses were inspired by the renowned Islamic bathing culture.

The number of swimmers increased by several hundred, and both celebrities and royalty visited the city. This helped to cement Varberg's standing as a prominent health resort.

In the early 1900s, tuberculosis was spreading in Sweden. In 1902, doctor Johan Severin Almer in Varberg founded the coastal sanatorium Kustsanatoriet in Apelviken for poor children who, due to poor diet and poor hygiene, were more exposed to tuberculosis. A good diet, sun, sea bathing and gymnastics were the recommended treatment until effective drugs were developed in the mid-1900s.

Varbergs Kusthotell is now based in the buildings built by Johan Almer. We have him to thank for our close proximity to the sea and for our beautiful buildings flooded with natural light.

Over time, the opportunity to travel by train, car and bicycle brought people from inland Sweden to the coast and beaches. Bathing evolved into an increasingly popular pastime, and from the late 1930s it became synonymous with summer as everyone started to be entitled to a statutory holiday. In the 1950s, visitors started to arrive by caravan in order to stay at the city's campsites. Kiosks, restaurants, hotels and summer houses became part of the bathing environment. Varberg's beaches were filled with visitors from all over the country.

From health resort to spa town

The health resorts of the 19th century, featuring treatments and bathing, have evolved into 21st century spa facilities focusing on enjoyment and relaxation. Varberg is now a modern spa town with several spa facilities, all of which are carrying on the city's bathing traditions in their own way.

Since the early 2000s, Varbergs Kusthotell's own modern thalassotherapy spa has offered visitors wellbeing by the seaside. Our classic treatments, such as seaweed baths, open air baths, saunas and massage are rooted in a long spa tradition.

Although the bath nurses of the past have been replaced with certified spa therapists, the foundation of our spa, thalassotherapy, or health from the sea, remains the same, and runs like a common thread throughout the centuries.

Every year, our hotel throws out 2.5 tonnes of plastic slippers. We need to change our behaviour and reduce the number of single-use products that are thrown away. We are starting to phase out our disposable slippers, for the sake of the environment. We therefore ask you to bring along your own slippers when you visit us. Any slippers can be used, as long as they are clean and can withstand the moisture found inside the spa.